Throughout this semester, I’ve been working on a project with the goal of raising social awareness on depression. Now I didn’t want this to be a typical project where I list the stigmas and tell people that mental illness is REAL. I feel like society has done a decent job of saying, “Yeah, depression is real and we need to do something about it”. But have we really done anything about it? We’ve done the studies, we’ve presented the statistics, and we’ve made it a little (not enough) easier to seek help, but that’s it. The other day, while studying for finals, I saw a commercial about depression in the U.S. (Good timing, right? Not like finals week was already killing my mood or anything). The commercial pretty much said something along the lines of, “millions of Americans suffer from depression. If you feel like this may affect you or a family member, tell your doctor,” and blah blah blah. THANK YOU for that 30 second commercial on a number and a person to contact. You didn’t even give any resources. You get the point.

Enough of my ranting, though. I can’t be too mad at society. How can it fix something that it doesn’t understand? Think about it. These stigmas exist because people who don’t suffer from depression can’t understand the behaviors of people who do. I have suffered with depression my entire life so when people say stuff like, “it’s just another type of blues,” or “everybody has their bad days,” I just can’t wrap my head around their logic. Then again, they can’t wrap their head around depression in general. Definitions don’t help either. It’s impossible to define depression without leaving someone out. Everybody suffers in their own way and for their own reasons. THIS is the next step society needs to take. It’s time to show people what depression entails in someone’s life and how understanding this can help them help us.

So that’s what I focused my project on: opening the eyes of people who do not suffer from this disorder while comforting those who do. I thought the best way to do this was to have random people take a survey on what they think of depression and whether they suffer from it or not. I decided to do this on Ohio State University’s campus. My college peers were extremely helpful and gave legitimate responses. Let’s look at my results.

70 people responded…let me repeat that. 70 PEOPLE RESPONDED. This was a HUGE sign of success since most people on my campus get an average of 30 responses. Not only did I get a great amount of responses, the content was also amazing. It was very heartwarming to see how many people truly understand the effects of depression. It was also heartbreaking to see some of the responses from people who have struggled/still struggle with depression. Let me point out that about 60% of the people I surveyed suffer from depression and 40% have never experienced it. That alone shows you that this illness is real and affects people around you, whether you see it or not.

Numbers aren’t important, though. The responses are what really matter. After I counted, I split the results between those who deal with depression and those who don’t. I created two wordles to show how different the responses were…and they were quite different.

When I think of depression, I think…

Have you experienced depression? NO

When I think of depression, I think… 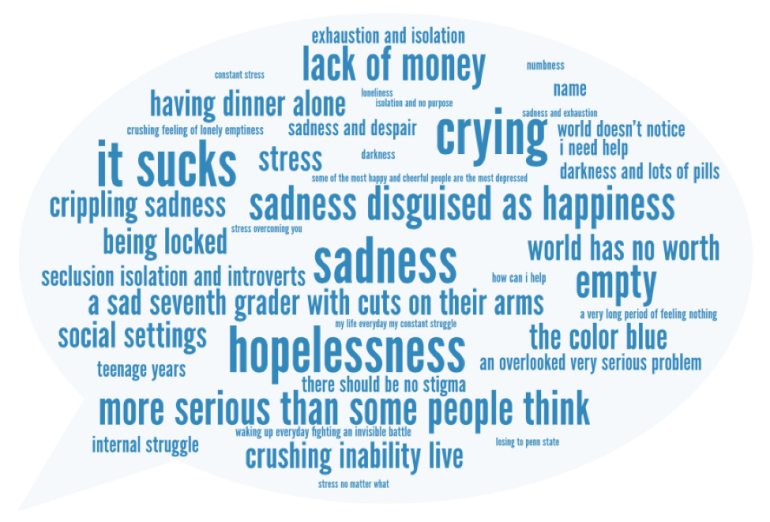 Have you experienced depression? YES

Did you notice how different the responses were? People who don’t suffer from depression gave a lot of textbook definitions; sadness, mental illness, loneliness, etc. And they repeated these answers at least 2-3 times. This is probably because they DON’T UNDERSTAND. How could they? They’ve never experienced such intense emotions. But I did find something amazing about this group of people. Even if they don’t fully understand these feelings, they were still very empathetic and some even responded, “how can I help?” This made me hopeful for how society will handle mental illness in the future. Empathy and understanding are the key to helping those with depression and it looks like we’ve figured out the empathy part.

When it comes to the other 60% of the people who do suffer from depression, their responses were very honest and there was no repetition at all. Some of the most memorable answers included, “the crushing inability to live,” “waking up every day, fighting an invisible battle,” and “a very long period of feeling nothing”. I relate to these people in such an intimate way, which was extremely impressive. This group was able to condense such relatable emotions into one sentence. They did something I thought was impossible: they defined depression.